The lakes and narrow rivers are the secret of wildlife visibility of Cuyabeno. In Cuyabeno the shores are so close on both sides that you really feel inside the jungle, while the narrow rivers still provide sufficient opening to see the trees with beautiful daylight lighting.

Few protected areas in the world have so many species of plants and animals. Its biodiversity includes 10 species of monkeys, and all large amazon mammals are present, such as tapirs, 2 species of deer, all amazon cats, including jaguars and pumas, capibaras, 2 species of dolphins, manatees, the giant otter, etc. The current number of registered bird species is now over 500. At the peak of the wet season, thousands of hectares of forest become inundated, forming an “El Dorado” for an estimated number 350 fish species, caimans, boas and anacondas, while countless frogs and toads sing their never-ending concerts.

The amazon tropical rainforest climate in Ecuador is characterized by an average of about 3000 mm of rainfall per year and an average day-night temperature of 23° C. However, these values are very coarse and temperatures are lower in the foothills of the Andes, where the Laguna Grande is located. At the lakes, on sunny days the temperatures usually run up to the low 30s, while at night the temperatures fall to a comfortable level: one needs a light blanket to stay warm.

“Laguna Grande” during most time of the year

“Laguna Grande” in dry season (between february and march)

If you visit the Cuyabeno Wildlife Reserve for minimum 4 days you will get the chance to visit to the Siona Indian Community. This ethnic group lives along the Cuyabeno River in 3 different communities, the biggest one is called Puerto Bolivar.

During your visit a Siona woman will welcome you and show you the traditional way of making casave bread and you will be able to experience native culture as it has existed for millennia. The local Shaman will instruct you in some of their religious practices and explain their medicinal knowledge, passed down from ancestors.

You will get a great appreciation about what it means to live in concert with nature and the native skills that allows for this complete sustainability. 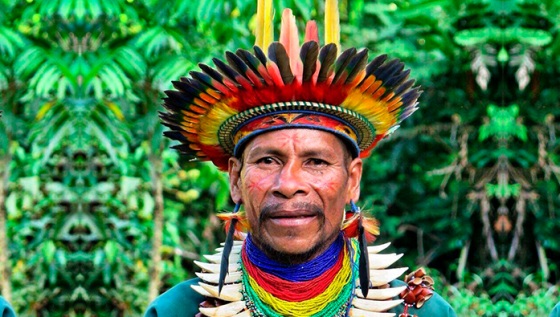 Do you want to visit?